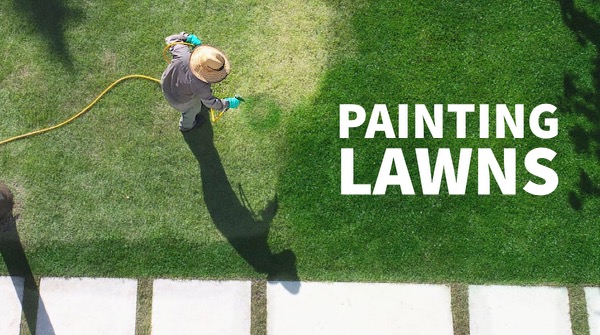 “The arms race of who is the best has changed over the past 10 years,” said Jeffrey Juchnowicz, owner of Terra Garden Solutions, a Naples, Florida-based business that provides fertilizer, pesticide, nutrient and chemical services for 8,500 home lawns in Collier and Lee counties. The biggest change is painting lawns.

“The arms race of who is the best has changed over the past 10 years,” said Jeffrey Juchnowicz, owner of Terra Garden Solutions, a Naples, Florida-based business that provides fertilizer, pesticide, nutrient and chemical services for 8,500 home lawns in Collier and Lee counties. The biggest change is painting lawns.

“It went from ‘who has the best agronomic mind?’ to ‘who is using colorant, how early are they painting the grass, are they using Endurant and how often?’” Juchnowicz said.

Why would anyone paint grass green?!

Painting lawns? But Why? These are relatively common first questions and reactions from people just learning about Endurant turf colorants.

“When I learned about turf colorant, funny enough, it was a Facebook ad that popped up from Geoponics,” said Juchnowicz. “I did the haha react,” he said.

Juchnowicz and his father are masters at caring for the common Florida turfgrass species. They were among those to think, “only a novice would need a lawn colorant, right?”

“Sure enough I looked into it. I was put into a situation that needed fast results. Fertilizer takes two weeks, but we have an event in three days,” said Juchnowicz.

“I laughed again and messaged Geoponics,” he said.

The property had super high pH soil that could not be amended. In a few days, the CEOs and other bigwigs would be doing their fall walk through, inspecting their developments of gated communities and shopping centers, including this property. Even a multigenerational turf professional like Juchnowicz felt the pressure.

He went to Ewing Irrigation & Landscape Supply to pick up the Endurant turf colorant they had in stock and applied it to the property.

“No one noticed and no one knew,” said Juchnowicz. “One day there was an issue and the next it was gone,” he said.

There are many reasons why people choose Endurant specifically. Juchnowicz had his own reasons and among them was ensuring that grass was green, but not nearby pavers, driveways, sidewalks or garden features.

“Staining during mixing is really the biggest issue. You can throw it in the tank and if it kicks back at you. With Endurant, you can get a wet rag and wipe it off pavement right away. With other paints and colorant brands, as soon as it touches pavement, it gets into those creviees and we can’t get it off sometimes for over a year,” he said.

Juchnowicz tells several client stories, including one of a woman who complained to him about a neighbor’s lawn with grass that was greener than hers. Both lost chlorophyll naturally during the colder months. The neighbor’s lawn lost color too, but it was painted and the color looked fake, he said. She didn’t believe him until he pointed out the marks on the pavers.

“You can tell who’s using Endurant and who is not,” said Juchnowicz.

Some are using indicator dye, some are using something so blue, it looks like pond colorant or lake dye, exclaimed Juchnowicz. And these are applied to high end properties in Naples’ Port Royal neighborhood. Almost everyone is painting lawns now, and they’re learning they better use Endurant for realistic, natural, lasting results.

Juchnowicz was asked to make the house at the end of Port Charles look perfect for the owner, who was on his way home. Of the 60 houses or so on the street, about 15 were painted and most looked terrible, said Juchnowicz.

“The one on the right looked like circus paint, fluorescent almost. The one on the left looked pale and patchy,” he said. “As you went down the street you could see all these different paints and dyes used. Then, you get to the one painted with Endurant and you see a natural green color,” he added.

The owner was thrilled, saying, “it never looked so good.”

First is that high pressure situation where you need results quickly. He often uses Endurant when something goes wrong to save someone else or to save himself. Endurant helps everyone keep their jobs as grass recovers from whatever is ailing it and maintains the healthy looking green color in the meantime.

The second use of Endurant is the proactive approach, he said. Going forward, he plans to implement the second approach to minimize the occurrence of high pressure problems.

Story from a Client: “Fire Them. The Grass Will Never Recover!”

“We got a call from a high end resident that a lawn company accidentally scalped her turf and she didn’t think it would recover. I know it will recover. She’s in her 80s and wants to fire the lawn company,” said Juchnowicz.

He applied Endurant to get the grass green while it returned to perfect health.

“In that situation, I saved not only the company I work with, but also my job. To use 10 gallons of water mixed in with Endurant to keep a high end client, it’s nominal,” he said.

Maintaining The Reputation as the Best in Naples with Endurant

Juchnowicz is not only a second generation Florida turf grass expert, he has been in the pest control and fertilizer business for 17 years and has owned his own company for 8 years. Terra Garden Solutions cares mostly for three species of grass: zoysia, seashore paspalum and St. Augustine.

“In Naples, for the past seven years, my Zoysia has looked better in the winter than any other companies and I got a lot of business because of that. My father helped write the sod farm specs for how to grow zoysia down here,” said Juchnowicz.

Then, one winter, someone else’s grass was looking greener, he said.

It seemed impossible. He knew better than anyone how to care for zoysia, maintaining color without getting fungus and without going dormant.

There was a turning point in landscaping when he saw that greener lawn.

“I took it as a slight. They don’t know how to take care of zoysia, so they had to paint it. I thought they used it as a crutch,” he said.

He laughed. But then he had a realization and soon a change of perspective.

“It opens a door for clients who are demanding or for high end clientele who want specific results, period,” Juchnowicz said.

It also helped him out of all those urgent situations, creating perfect grass in time for an event.

The Benefits of Painting Lawns with Endurant

By painting lawns with Endurant, he minimized the fungicide, insecticide and microbe costs, diminishing their need in the winter and instead just painting lawns around the end of November to mid-December. The color lasts.

He has no worries about a fungus problem or a big orange spot and he can apply Endurant lawn colorant once, saving on two applications of fungicide, insecticide and micro nutrients.

“It’s much less than half the cost in materials plus the savings in labor,” he said.

While Juchnowicz does not apply fertilizer on zoysia because it will cause problems with the fungus, he does save on the other potential environmental contaminants by choosing Endurant instead.