Two things make great turf: genes and the environment.  From my perspective the job of a turf manager is to manipulate the turf environment to allow turfgrasses to express their traits to the best of their genetic potential.  Most people know this means, for example, aerifying with the proper tine at the right depth at the right time.  Consider that core aerifying changes the turf environment because it relieves soil compaction and allows air to enter into the soil, releases CO2, and thus stimulates root development.  Coring also removes surface organic matter.  Most would agree that these are positive outcomes.  But core aerifying can also soften turf surfaces, something most superintendents don’t typically strive to do.  And it can be disruptive to golfers both physically and mentally.  It’s what I call a member unfriendly cultural practice.  The point is cultural practices have consequences, both good and bad.  And sometimes employing management strategies for their perceived positive impacts can hinder management objectives.

As an example, consider that certain nutrients are less available in soils having a high pH.  Lowering pH to a more favorable point makes these nutrients more available.  Applying elemental sulfur is a cultural practice that has been recommended for years for this purpose, and is frequently done.  Sulfur (S) lowers the pH of soil solution by reacting with available oxygen (O2) to produce acidity (H+) per the following reaction:

However, one consequence of applying sulfur to lower pH is depletion of soil oxygen, reducing the amount available for the respiration of plant roots and microbes.  This is because oxygen bonds to sulfur in a chemical reaction to produce the acid.  Reduced levels of oxygen can then have an impact, for example, on nutrient uptake because ion transport across root membranes is directly related to root respiration rate which is in turn directly related to oxygen concentration.  That sulfur can deplete soil oxygen is illustrated in Figure 1.  As sulfur is increased from zero to three pounds per 1,000 sf the pH of the soil is reduced from 7 to 4.5.  But note how soil redox potential is also reduced.  Redox potential is one way aeration status (aka oxygen content) can be measured.  Low values indicate lack of oxygen hence anaerobic conditions. 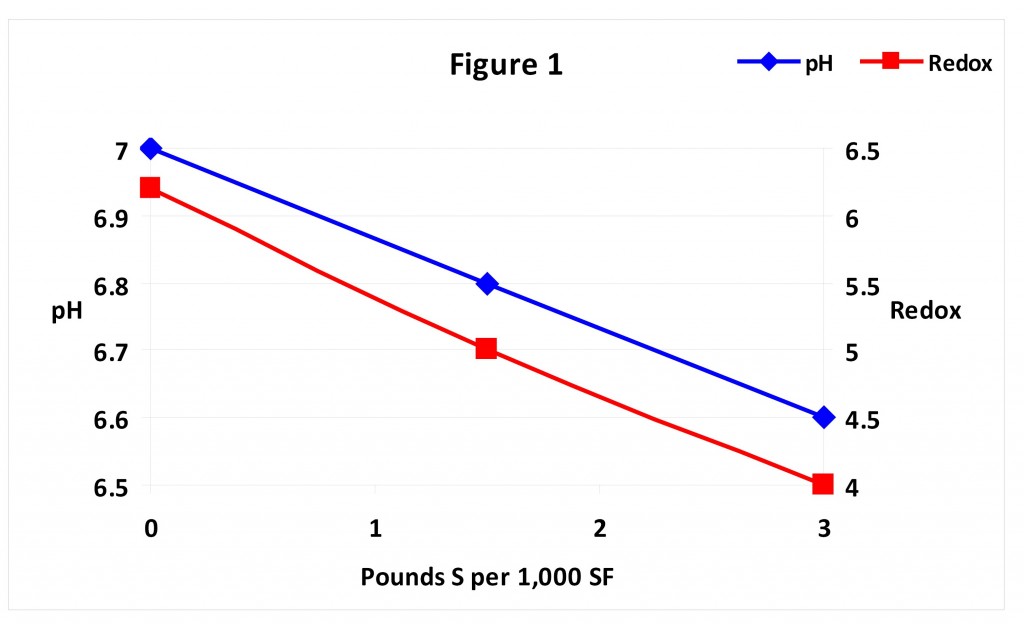 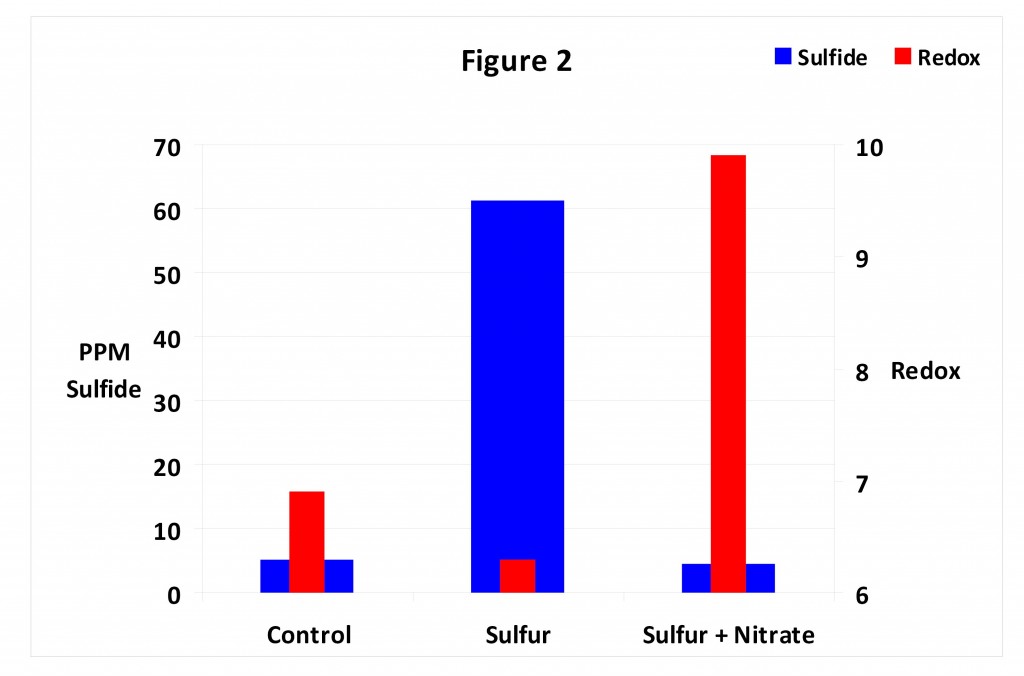 Fertilizing with natural organic sources of N such as Milorganite or ammonia-based N carriers can also deplete soil oxygen and reduce redox potential.  This is because a process called nitrification takes place.  This is analogous to the sulfur reaction.  Nitrification is the conversion of ammonium (NH4+) into nitrate (NO3?), just like sulfur (S) is converted into sulfate (SO42?):

Note that, as with the sulfur reaction, oxygen bonds to nitrogen.  As a result the level of oxygen is reduced.  It becomes tied up with creation of a new molecule.  This is called an oxidation reaction.  Incidentally, both processes contribute to lowing soil pH; these oxidation processes release H+ ions (aka acidity) directly to the environment.

Are there other oxidation-reaction related cultural practices being used?  The answer is yes.  Some turf managers have applied sugars like molasses to turf to stimulate microbial activity.  The sugars are oxidized by the microbial communities via respiration, which consumes oxygen.

And as the populations feed on the sugar they grow in size using more and more oxygen.

Does all of this mean that sulfur, ammonium fertilizers, and sugars should not be used?  No.  Manipulating pH of soil with sulfur and fertilizing it with materials like ammonium sulfate can be positive practices in the right circumstances.  Stimulating microbial activities can also be positive.  But be aware that if the soil tends to have a low redox potential to begin with then such practices would be contra indicated.

Keep in mind that organic matter is always oxidizing in soil consuming oxygen when it is available.  Soil can become more anaerobic and attain a lower redox potential when it gets saturated with water during prolonged rain events.  This is because water greatly restricts the rate of oxygen diffusion into soil.  And if soil then becomes compacted there is less air-filled pore space, which means a grater percentage of the pore space contains water further restricting the rate of oxygen diffusion.  And then if sulfur, ammonium, or sugar is applied the redox potential falls ever further and boom, the black layer happens, or maybe something even worse.  This is why avoiding the application of sulfur and fertilizing with nitrate-based N carriers, which increase redox potential, is a BMP for managing anaerobic soils and the black layer.

The redox potential of the soil is a highly important component of the turf environment that managers influence through their cultural regime every day whether they know it or not.  It’s a prime determinant of turfgrass health and quality, and something turf managers need to learn more about.  Having a better understanding of how each cultural practice can influence the various components of the turf environment can result in a better chance of successfully fulfilling management objectives.

SEE HOW YOU CAN INCREASE THE REDOX POTENTIAL OF YOUR SOIL